The body starts to slow down as we age. The brain can also slow down. You may start noticing that it takes mom a little longer to remember things. She might have a little more difficulty learning and retaining new information. However, actual memory loss is not a normal part of aging but is usually accompanied by disease.

At some point in our lives, we probably have all walked into a room only to have forgotten what we went after. The thought that might flash through our minds is “am I getting dementia”? The truth is, something as simple as stress might be the cause of occasional forgetfulness. Memory loss and forgetfulness are not dementia.

So, what is dementia in the elderly? Dementia isn’t a disease, but a group of symptoms that can develop due to a variety of possible diseases. These symptoms can include memory impairment, a decline in judgment, behavior, reasoning, communication, and the ability to plan and initiate complex behavior. There must be at lease two types of impairments that significantly interfere with everyday life to have a diagnosis of dementia. 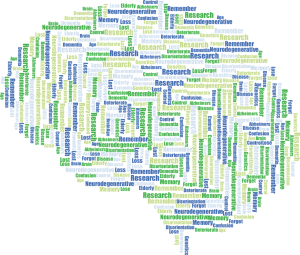 The symptoms of dementia progressively worsen over time, and it’s possible to hide some of these symptoms in the early stages of dementia. The first symptom you might notice is subtle short term memory loss. As dementia progresses, you may see a personality shift or change in mood such as depression, agitation and sometimes even aggression.   You might notice a loss of interest in hobbies or a lack of desire to spend time with family and friends.

Other symptoms you could see are a difficulty finding the right words when trying to communicate, apathy, trouble exercising judgment, not keeping up personal care like grooming and bathing, or difficulty completing normal tasks like following a recipe, balancing the checkbook, or writing a letter. Confusion, a decreased sense of direction, difficulty following storylines (both in conversation and on tv), repetitiveness, and struggling to adapt to changes are also symptoms that may appear.

The cause of dementia can be related to disease, infection, stroke, head injuries, drugs, or nutritional deficiencies which create a dysfunction in the cerebral cortex of the brain. The cerebral cortex controls perception, language, memory, language, thoughts, and consciousness. Dementia can have a combination of causes such and vascular dementia and Alzheimer’s dementia.

Some irreversible causes of dementia are; Alzheimer’s, Lewy bodies, vascular dementia, multiple sclerosis, Parkinson’s disease, Huntington’s disease, Wernicke-Korsakoff syndrome, and Creutzfeldt-Jakob disease. Chronic traumatic encephalopathy can be another cause of dementia seen in athletes with a history of repetitive brain trauma.

There are some potentially treatable causes of dementia, and their ability to be treated depends on the severity of the cause. Some of these treatable causes of dementia are; brain tumors, hormone disorders, poor oxygenation, infection, normal pressure hydrocephalus, simple hydrocephalus, metabolic disorders, nutritional deficiencies, chronic alcoholism, and drug reactions, overuse, or abuse.

If you start noticing some symptoms of dementia in a loved one, the first course of action should be an evaluation by a doctor. The doctor will probably review her medical history, medications, and symptoms. It is helpful to have someone go with her who knows what her symptoms and behaviors are.

Diagnosing dementia can’t be done with a single test. The doctor will probably conduct a physical exam and may perform some tests that measure thinking, memory, orientation, reasoning, judgment, language skills, and attention. He may also order tests such as a brain scan, CT scan, MRI, or PET scan that could help find or rule out possible causes of dementia.

The doctor may order blood work for lab tests that could rule out problems such as B12 deficiency or problems with the thyroid. In some cases, he may order a spinal tap to check for possible diseases that would show up in the spinal fluid.

It can be a challenge to care for someone with dementia. In future posts, we will address ways to communicate with and care for the older person with dementia.